When the pandemic emerged, we all became immersed in a new reality which has had a huge impact on our daily lives. It has been more than 2 years since our life, in this case the life of futnet players, is no longer the same. But somehow we have learned how to live with and in spite of Covid-19. National as well as world tournaments stand as proof that we are stronger than ever.

Despite the overwhelming consequences of the pandemic and of its ongoing risks, futnet players around the world have managed to take part in different tournaments throughout 2021. And they managed to do so by respecting COVID rules.

During 2021, multiple tournaments were organized, but the major futnet events were Futnet World Championship U21 organized in Șimleul Silvaniei, Romania and Women’s Futnet World Championship organized in Burriana Spain. At singles, 2021 men U21 and women gold medals were Czech Republic and Hungary. Here we have to mention that Lepsényi Boglárka, the Hungarian world champion has won the title for the seventh time in a row which is indeed a tremendous performance. She was followed by Slovakia and Czech Republic. On the other side, U21 silver and bronze medals went to Slovakia and France.

Regarding Men U21 doubles and triples, the results of the direct confrontations brought on the podium to both categories the national teams of Czech Republic, Slovakia and Iraq.

When it comes to Women doubles and triples, this year was the year of surprises and twists. Except from the fact that it did not come as a surprise at all that Hungary reaffirmed its hegemony at singles, it came as a surprise that Switzerland did not manage to confirm its previous success and was outplayed by Slovakia and Czech Republic and left without a medal. As to doubles and triples, Hungary had here no representatives so the first two medals, gold and silver were won both on singles and triples by Czech Republic and Switzerland. Romania got the bronze medal in doubles and Slovakia in triples. It is important to mention that Poland was one of this Championship’s surprises by managing to get really close to winning a medal. Maybe the future World Championship will get the polish girls on the podium. Until then, we are looking forward to see what 2022 will bring us and who will be the Men Futnet World Champions. 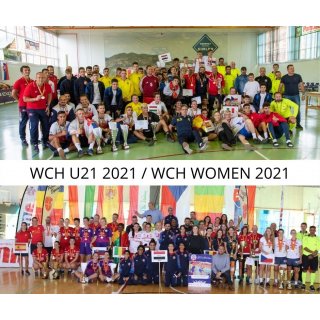 The second edition of the Estérel Futnet Cup has been confirmed!